skip to main | skip to sidebar


Much has been made about the emergence of fake news in 2016 and its effect on the election. There’s also been much tsk-tsking of Mark Zuckerberg and Facebook for not doing an adequate job of alerting readers to what is real and what is fake. But the discussion seems to be missing the point, which is that the problem with Facebook goes much deeper than what gets shared on it. 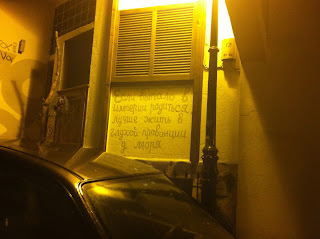 A wall in Thessaloniki's Ano Poli

Fake news is not new. And it is not the problem. Propaganda, libel, and lies have been around forever, and certainly has affected history in more serious ways before – the Protocols of the Elders of Zion reverberated in this election still. More recently, each of us has an uncle or (alas) a parent who has been taken in by an email chain with the subject ‘Fwd: Fwd: Re: Fwd: You have got to SEE THIS’ that suggests Obama is an American-hating Muslim who won’t place a flag pin on his chest or his hand over his heart during the pledge of the allegiance. It’s always been there.

Fake news is not good, but it is a symptom of more troubling problems on Facebook and elsewhere. For example, our failure to think critically and distinguish competing viewpoints.

This summer I had a discussion with my father, a Russian-Jewish émigré who left the Soviet Union 35 years ago to enter the states, and is now an American. We got on the point about staying informed in the news or otherwise. He puts on the nightly news, and he gets those email chains, and who knows where else he pulls info from online.

‘It’s all crrrap!’ he said. Which, fine, if you grew up in the Soviet Union and were independent-minded enough to discern that communism is crrrap, you’re probably going to emerge with damaged critical thinking skills – everything is to be disbelieved, and so everything is crap, except for what you already believe and know. I can sort of give him a pass.

Americans don’t have the same inherent excuse, and our collective inability to assess what we receive from the media and discern what is true from what is false is troubling. So is the failure to accept subjective or supposedly subjective viewpoints from different sides as a way of cobbling together a fuller, more objective understanding of a given issue. The source of this inability goes beyond the scope of this article, except to say that Facebook doing our critical thinking for us misses the point.

The point is one that is much trickier for Facebook to solve, because it runs against their very purpose of existence, but here goes: the problem is that we’re all on Facebook too much, and we shouldn’t be. The reliance on Facebook and other social media networks for our consumption of the internet and the world is bad for us, and the fake news ‘epidemic’ is just a symptom of it.

I’ve held that view for a long time, in a crotchety old man sort of way, so this may be self-serving. My concern was about Facebook's effect on our social lives. In light of the recent election, though, and in light of the mania about fake news, it’s important to revisit this and its effect on our body politic. There are a number of reasons that Facebook is bad for our civic health, and there are things we can do to change it*.

*(I’m using Facebook as a shorthand for modern internet consumption, including social media networks like Facebook and Twitter, as well as shallow searches via Google to discover everything, while always staying plugged in via our phone and other devices. The aim is not to be all encompassing – I don’t know how this applies to Instagram or Snapchat, for example, though I expect it remains valid. And ‘we’ is primarily about the U.S. and the West more broadly, as witnessed in my 8 years living in Europe and Israel as well as still being in the American internet milieu.)

The most obvious reason is that Facebook monopolizes our attention. We spend a lot of time on here and without much consequence – making and reading surface-level jokes and interactions and thoughts about politics and everything else. Combine this with mobile phones and people never leave their feeds; downtime is just an excuse to check what everything else is doing.

In theory, an attention monopoly wouldn’t be so bad if that which commanded our attention was providing a useful service. But there is a great deal of stress placed on that source, and we have to hope that we’re managing it well enough to get a healthy balance of information. Which no one does.

I’m not the first to point out that a print newspaper affords easy browsing in a way that most websites don’t. While the internet would seem to offer endless space and information, a screen is less likely to expose us passively to new ideas. But even a website that does its job well will surface some stories you might not have known to look for but can benefit from reading. A feed like Facebook’s might do this as well, but there is a much stronger chance that the feed is controlled to limit alternative viewpoints or cognitive dissonance; you will read an unexpected story, but one that makes an expected point.

Moving on, a more pointed and Facebook-specific problem is that it is ‘social’, and that we are ‘participating’ and ‘interacting’ with the content. As if we are really discussing the ideas passed along and skimmed over as we wait on the subway or prepare for bed. But we are not. We are typing and forgetting and not affecting anything. Before Facebook, we may not have done much either, but at least we didn’t fool ourselves. If nothing else, this election and the 2012 one where the right was sure it would win have proven how much we actually achieve on social media. Not much.

Lastly, the internet-wide problem that is only exacerbated on Facebook is the quest for speed and for clicks. I work at a website, so I don’t claim innocence here. But most times, we are not on a ‘need to know now’ basis about news, and yet news is reported that way. News is then further sensationalized and promoted. I learned about the October James Comey letter to Congress on the New York Times site, where they blasted it like it was a story of titanic significance. It’s not their fault to some degree – they would have looked bad if they weren’t keeping up with everybody else – but as we saw, the story was nothing. And while newspapers have always traded in sensationalist headlines, the business has gotten to the point where it depends on traffic and where news is a commodity, and so there’s a race to be first and loudest.

Facebook exacerbates this because it comes colored through the voices of our friends, who know how to trigger our emotions better - not in a Machiavellian way, but because they care and want to share their feelings. The articles in our feed trigger our sarcasm, our anger, our joy, our pride, or whatever else, which further reinforces that the information is not received and taken into proper context, and we are probably worse off and less informed for having consumed the information**.

**I read this article this week and thought its theme echoed this point.

So where does that leave us? The most obvious thing would be to quit all these social media accounts. That’s not super realistic - Facebook has succeeded in working itself into our day to day lives, and it will be hard to unplug immediately, and not wholly necessary***.

***Again, using Facebook as a shorthand for social media as a whole – I’m pretty sure Twitter could stop working tomorrow and society would be better off.

There are things we can concretely do, though, to mitigate these problems:


I realize I’m a little late in writing this, and the fake news hysteria in and of itself passed about a month ago. Fake news has become another partisan term deployed on both sides to mean a number of different things. ‘Truth’ is still a real thing, and it is still important to assess, support, and discover. Fake news is a problem, and I don’t want to ignore it.

It’s important, however, not to let ourselves be distracted from the underlying issues that affect all of us. Namely, if we keep frittering our lives and our attention spans away on social media, we won’t ever be able to talk to one another, we won’t achieve anything, and we won’t have the context or depth of information to be able to tell what’s real from what’s fake. Then what the truth is won’t matter, because we won’t be able to handle it.
Posted by Dan at 3:07 AM No comments: