skip to main | skip to sidebar

Luxembourg after eight days, in ten words or in 2,000 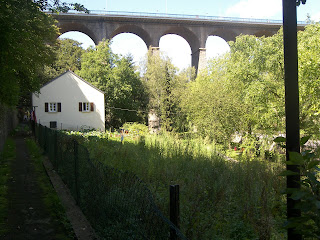 A few possible mottos for Luxembourg, the capital of the country of Luxembourg:
“Luxembourg: Always Take an Umbrella”
“Luxembourg: Everything’s Smaller Here”
“I don’t need to look like a Luxembourger to know how to say, ‘I’m a bad mofo’ in Luxembourgish”
“Luxembourg: Notre grisaille est notre beauté“  (Our grayness is our beauty)
“Luxembourg: Come for the Eurail Connections, stay for the view”
“Luxembourg: Non, we are not a city in Germany.”
*** 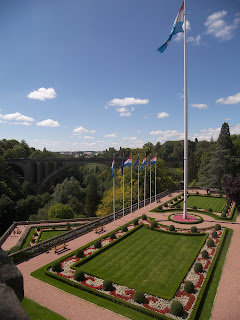 The first impression one has on Luxembourg, before one arrives, is a collective “Really?” The relatively non-EU exposed will say, “Luxembourg is its own country? Really?” The geographically curious will say, “Luxembourg is smaller than Rhode Island and a sovereign country? Really?” The young man moving to the city and looking for a job will say, “I might have to learn Luxembourgish? Luxembourgish is a language? Really?” Luxembourg is something of the fairy tale on which the hopes and dreams of modern Western Europe are built, and much of it challenges credulity.
Luxembourg is the world’s only Grand Duchy, meaning the only place ceremonially ruled by a Grand Duke. They have pictures of the current Grand Duke, a tall and handsome man named Henri right out of “Choose your Royal Figure!” casting books, everywhere in the city, a degree of admiration and worship I’ve only seen surpassed in less politically balanced countries; I saw about as many pictures of Paul Kagame in Rwanda as I have of Henri here.
Luxembourg is a tiny country, one that not surprisingly suffered from invaders and changing rulers for much of its history. It gained its independence in the mid 19th century, discovered a deep iron ore shortly thereafter, and managed to maintain some wealth for the rest of the century. In the 20th century, twice the country suffered under German invasion and occupation. It makes sense from that perspective, then, that the country would be one of the founding members and driving forces of the EU, which in its first form was the European Economic Community, if my memory of undergraduate history serves me correctly, and that community may have well been based around the trading of iron and steel, at the time a cornerstone of Luxembourg’s economy. In the 21st century the country serves as one of Europe’s financial capitals, holds the European Court of Justice to boost its claim to being Europe’s 3rd capital (behind Brussels and The Hague, I believe? Or Paris?), and due to a relatively low tax rate also hosts a number of multinational companies (Amazon and Skype (pre-Microsoft at least) are two examples that come to mind).
Luxembourg is a tiny country and host to a tiny population. The capital, where we live, boasts of 100,000 or so residents. The country as a whole has a population of 500,000. Meaning Boston’s official population is about 100K people more. Like Boston, however, Luxembourg has a huge commuting population during the regular working day. According to our relocation agent, that 500K swells to two million people on a given weekday as workers stream in from Belgium, Germany, and France (the three surrounding countries) to take advantage of Luxembourg’s strong economy and generous worker benefits. Even in the height of the August vacances, every other car I’ve seen seems to have a D or F license plate for Deutschland and France, respectively. 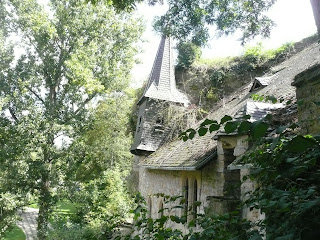 For all that, we do live on something of an incline, and from our 3rd floor apartment (4th floor by American counting), we have a slightly elevated view of the center and of the old town, and a peering glance to the train tracks and villes basses below. The contrast between that high and low, along with the contrast between the more traditional center and the modern surrounding neighborhoods (to our northeast, we can spot the beginning of Kirchberg, where the EU institutions are housed), and the ever-present contrast between sun and clouds, blue and gray, lends Luxembourg its beauty, a beauty it can boast of.
At that, I leave you with a picture of the view I have from my desk, as well as a standing invitation, presuming I actually know you, to come visit. And if I don’t know you, just visit this site for more writing on Luxembourg, travel in and near the country, and any other adventures that merit the time. Tiptop? Tiptop. Et Merci. 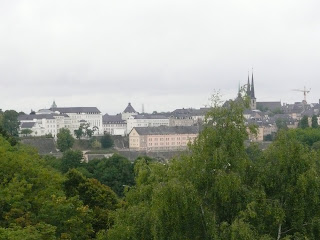